War With The Evil Power Master

Here's a link to the photoshop recap video! Hope you enjoy it! Normal video updates to resume soon.
Posted by Deceased Crab at 20:52 2 comments:

Well, it's been a long book. We've seen many ways to die and win. We've been humiliated, mocked, vaporized, and raped. Now, it's time to finish things. The previous branch was the last one. So let's see what kind of ending we get if we put Tonto in charge. 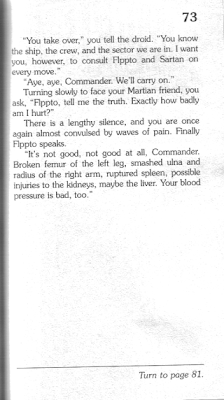 Damn you Flppto, you play too rough. Look what you did! The Commander is just too dumb to die like he ought to. Maybe we'll get lucky and he will anyway. Chances are low. 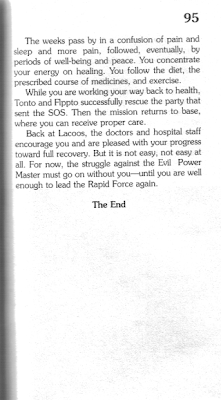 You enter a longterm recovery program. Nevermind the fact that no one is paying attention to the Evil Power Master, they're too busy worrying over the Commander. I hope they all get vaporized into... vapor!

Well, that was three solid pages of boring. Let's see if putting Flppto in charge (an awful idea) ends it on a better note. 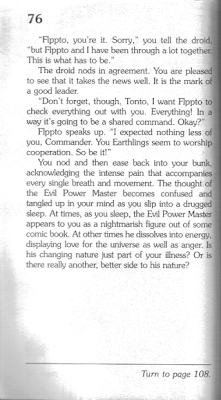 We assign leadership to Flppto, because in our feverish state we're too busy having fever dreams to full realize what he did to us. Commander, now is not the time to put that guy in charge. 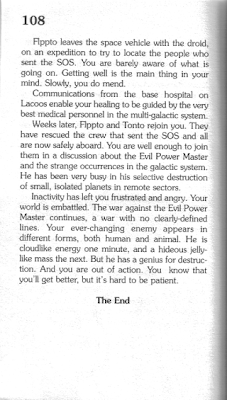 Flppto takes our position. He's taken everything from us, now our title. We sit in a hospital bed, unable to stop him or the Evil Power Master. That bites.


And with that, we've seen all 30 endings and have concluded the War With The Evil Power Master. 10 Endings that aren't. 6 measly victories. 18 ways to FAIL. 12 ways to die. And 13 endings that don't make any sense at all. I think that's about enough torment from this book. 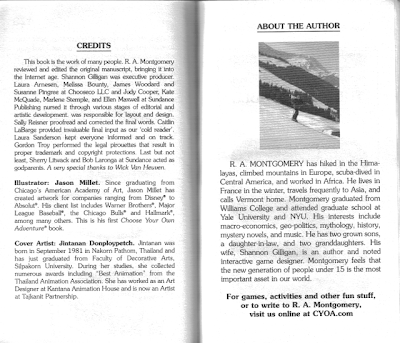 Here are the idiots responsible for this travesty.

Next time on War With The Evil Power Master... 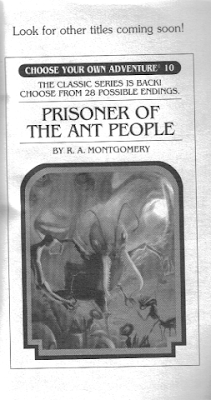 No, I don't think we'll be reading the prequel. We will, however, be going over some of the wonderful photoshopped entries we've received. I might make a video of it, so keep your eyes peeled. In the next couple of days, I'll also announce the winners, so stay tuned viewers!
Posted by Deceased Crab at 10:24 4 comments:

Branch U: The Terrible Things Martians Do

When we last left off, we were about to go search for the Evil Power Master's jungle base. 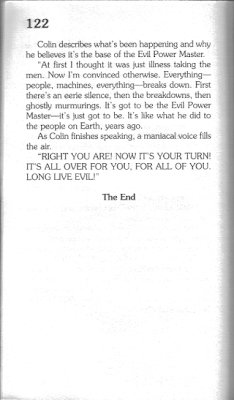 I'm not exactly sure why Colin explaining his reasoning behind the base theory and hearing some maniacal gloating counts as the end.

Well, that was no good. Let's leave this wretched planet and go to Follop. 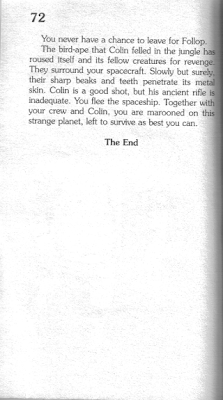 Bird Apes destroy your ship, because that is how they roll (with their beaks).

This is the price we pay for analyzing this tape: The planet kills us. So let's just head toward it without hesitation. Although... 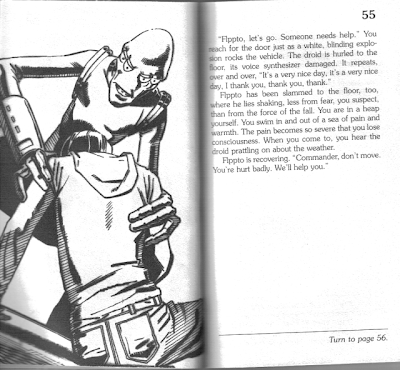 Our escape vehicle explodes. Hard Man gets knocked around. The Commander is a mess. Flppto moves to help h- 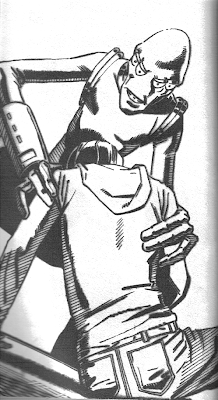 We... um... the book has delivered us the final insult. It has taunted us and tormented us. Now? It has violated us. And we will never be the same.

You thought the Evil Power Master was bad, all this time? Well, we just got raped by Flppto. Now you realize why I was so enthusiastic about shooting him.

Blacking out is a natural reaction to martian rape. And we're unfit to lead. And injured. And violated. Oh... god.

Who do we put in charge now? Tonto (AL) or Flppto (AM)?
AS IF IT MATTERS. NOTHING MATTERS NOW.

You know what, most of you want to rush headlong into this. But I'd rather be paranoid awhile longer. Surely the book wouldn't punish me for that... 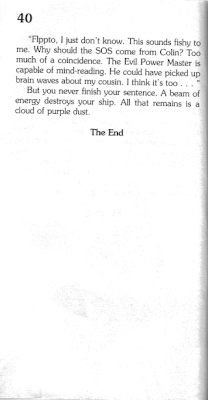 Oh come on. That bites. For our continued indecisiveness, we get lazered out of nowhere. We die. And the neighbors read our mail.

Wow. I'm excited about the prospect of not being murdered right out of nowhere in the next ending we get. 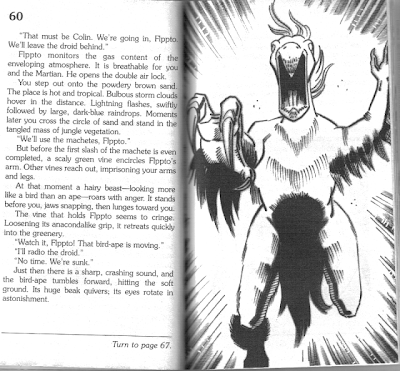 ...I'm going to pretend I didn't see page 61 for a second.
In any event, we land in the jungle, leaving Hard Man behind. Vines grab us for no damn reason. And... and... 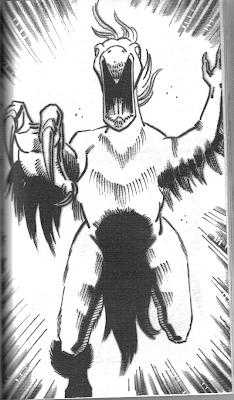 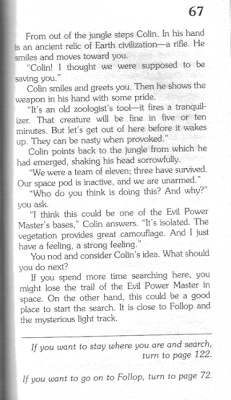 It's Colin. Oh joy. With ridiculous antique weapons. Like all good commanders, Colin is a failure and most of his party is dead.

Decision time. We can run through the damn jungle, looking for the Evil Power Master and getting murdered by vines and bird apes (AX), or we could leave this horrible place and go to Follop (AY).

But something tells me we're going to regret tomorrow's update. Or at least I am.

We can't trust this SOS apparently, so we're going to have a sit-down and analyze it. 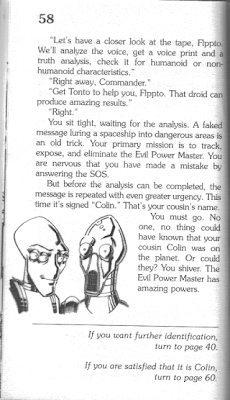 There's the best face shots of Flppto and the droid in the entire book. And by best, I mean I wish they were both dead.
Before we can finish our analysis, the name of that one guy we know from that one time is added to the new message. I think the real question is, Do We Care?

Are we still going to act paranoid, thinking this is an Evil Power Master trick (Branch AJ), or are we actually going to act on this and try to help people (Branch AK)? Poor Colin, if only he knew the people pulling the strings behind our decisions, he wouldn't even bother with the SOS.
Posted by Deceased Crab at 07:27 5 comments:

Being a mass of uncaring jerks, we have elected to ignore the SOS, still. But somehow I figure this will come back to bite us in the nads anyway. Let's look for Survivors. If we find Richard Hatch, he dies first. 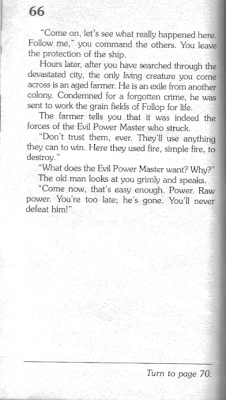 > Explore Ruins
You find a farmer.
> Talk Farmer
The farmer whines about how the Evil Power Master set them all on fire, is unstoppable, dapper in that hat. 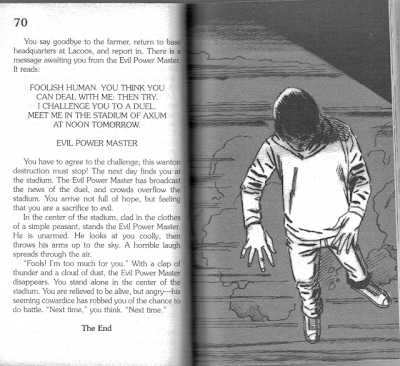 ...Wow. That didn't go so well. I'll never look for any survivors again, ever, in any context. Maybe that SOS won't get us so thoroughly embarrassed. 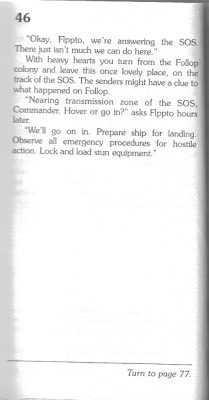 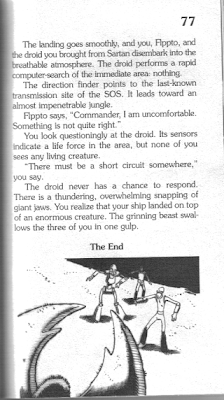 You land. You look around for the SOS. A giant monster eats you. Also, your parents never loved you.

Wow. I'll never ignore another SOS again. Because if I do, for even a second, apparently I will die, or worse. Let's go ahead and go to that SOS. 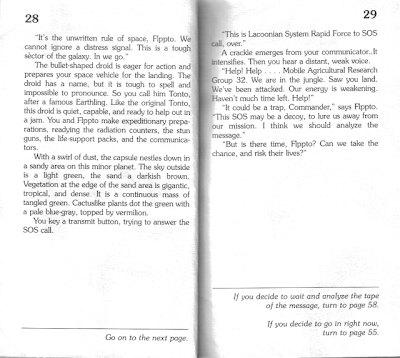 The damn book decides to rename the droid I've been calling Hard Man all this time. They call him Tonto because they are stupid and unfamiliar with how awesome Megaman 3 was. This book belongs in a fire.
We land on the jungle planet. We answer the SOS. And what does Flppto do? He starts getting paranoid, saying it could be a trap. Listen you Martian Jackass, in another branch you totally chewed us out for not answering an SOS. If you think you can get away with second guessing us now, I'm going to ram your stupid martian head into the fertile jungle ground and keep you freshly watered (after beating you to death) so that in 6 to 9 months I can grow a good crop of Jackass Plants.

If you would like us to (T) Listen To Flppto (who will die alone), state that you would. Alternately, you can tell us to (U) Investigate The SOS Right Now, Flppto be damned (he already is, and will burn in a lake of fire for all eternity).

Most of you voted to ignore the SOS. Good on you! I was sick of putting up with Flppto's wishes. 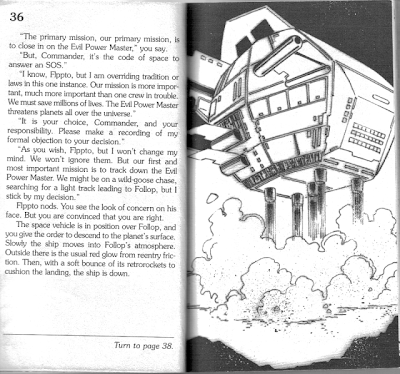 What's this? Flppto copping an attitude with us? We've dealt with Octopi before, we don't need to put up with his crap. He can take his official protest and cram it up his martian butt because when this is all over I'm going to bust that stupid punk back down to private. He'll be doing latrine duty for weeks. No one messes with the Commander in the middle of a wartime battle situation.

Maybe the authors home was in this city. That'd be nice. 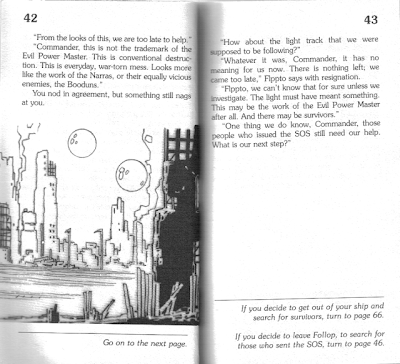 Well, Flppto has gone all emo on us, and the city of Follop is dead and destroyed. Was it their natural enemies? Was it the Evil Power Master? But more importantly...

...Do we give a damn? Should we go outside and check (V), or leave any survivors to their own devices and go back to that damn SOS we're already in trouble for ignoring (W), or would be if we weren't going to murder Flppto and change the record to remove all hints of any wrongdoing on our part. Damn Mouthy Martian.
Posted by Deceased Crab at 07:32 6 comments: